Since independence, Mirpur has grown into a behemoth of Dhaka with a life of its own. Having been assigned thana status in 1972, Mirpur has seen massive growth and development in the past few decades. Encompassing an area of more than 58 square kilometers, the gentle giant Mirpur is home to more than 600,000 residents. The main artery of Mirpur is Begum Rokeya Sarani, a road that cuts through the heart of Mirpur and gives it access to the rest of Dhaka. To the east of this road are a spattering of areas that grouped together we will call Mirpur East. The areas included are significant portions of Senpara Parbata, Mirpur 14, East Monipur, East Kazipara, East Shewrapara, Ibrahimpur, and parts of Kafrul. Mirpur East is mainly residential, with commercial and industrial zones mostly located on the Begum Rokeya sarani. This area has seen a rapid increase in real estate prices in recent years, and with the completion of the Mass Rapid Transit system, the prices will increase even further. This makes the area a land of potential and opportunity!

Mirpur East is the quintessential middle class neighborhood, with all the features that come with every middle class neighborhood - the hustle and bustle in the busy streets, easy access to public transportation, and the feeling of familiarity amongst neighbors. Living in the area is inexpensive, with rent being extremely affordable. The price of buying property is reasonable in the area but prices are on the up. Areas like East Shewrapara and East Kazipara also offer amazing accessibility as a result of being adjacent to several important roads, including Begum Rokeya Sarani. If you’re looking to shop for fresh groceries, there’s Shewrapara Kacha Bazar on the western side of Begum Rokeya Sarani. And for all other daily necessities, there are countless supershops, the largest and most famous being Daily Super Shop, which is also on the western side of Begum Rokeya Sarani. All in all, you could say that Mirpur East is a lively neighborhood where there is this sense of camaraderie amongst its numerous inhabitants.

The streets and alleys of Mirpur East are always crowded with throngs of people going from point A to point B on their daily travels, with Begum Rokeya Sarani being one of the busiest roads in Dhaka City. It is home to countless banks, hospitals, corporate offices, restaurants, showrooms, brand outlets, and RMG factories. The main road is where most of the commercial properties are located. As you go into the interior of the area and its multiple neighborhoods, you will see the residential properties, old and new. The area, and all of Mirpur in general, is seeing an upward trend in the prices of property, which makes it a prime location for investment in Real Estate. 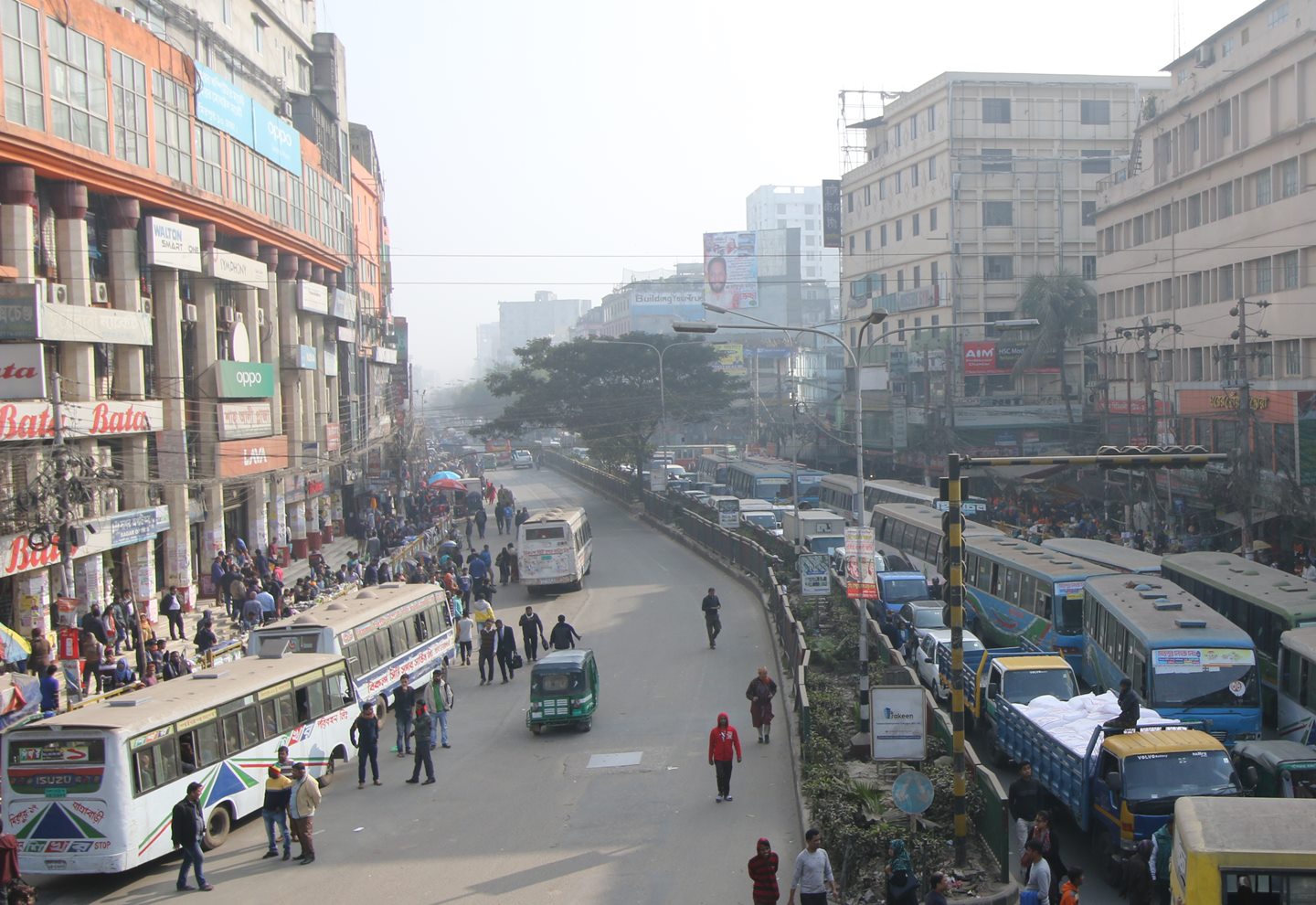 What makes Mirpur stand out from most other areas of Dhaka is its connectivity and transportation system. And the main driver behind that is Begum Rokeya Sarani, with most of the major bus transportation routes connecting Mirpur with other major areas of Dhaka going through the road. Anyone living in Mirpur East will never face any sort of difficulties in finding public transportation. Another useful shortcut to the area going through Kafrul is Shadheenata Sharani, which connects Airport Road with Mirpur Road, offering the residents of Mirpur East a shorter route to Mohakhali, Banani, and Gulshan. MRT Line-6 of the Dhaka Metro Rail system, which is currently under construction, is also being built on Begum Rokyea Saran with several stops along Mirpur East. Once the line is completed, the residents of Mirpur East will enjoy quick and easy access to other areas of the city, including Uttara, Farmgate, Kawran Bazar, Shahbag, Dhaka University, and Motijheel. There is another line slated for construction, MRT Line-5, which will have stops near Mirpur 14.

Educational institutes are an important factor in the development of any area, and Mirpur East has numerous such institutions. Branch-2 of Monipur High School and College, located in Ibrahimpur, is one of the best schools in the area offering education under the National Curriculum. There are many other schools in the area offering education in both English and Bangla. Green University of Bangladesh, located on Begum Rokeya Sarani, is a private university offering quality higher education for the residents of the area. Other great schools and universities are also located in nearby areas, such as Shaheed Police Smrity College (SPSC) and Scholastica Mirpur.

The area is home to many diagnostic centers and pharmacies offering medical services and medicine. Mirpur East is also home to several major healthcare facilities, such as Al-Helal Hospital, EXIM Bank Hospital, MARKS Medical College & Hospital, and High-Tech Multicare Hospital. There are other hospitals in nearby areas as well that will cover the medical needs and services of the residents of Mirpur East, such as Ahsania Mission Cancer Hospital and Dhaka Dental College. Large pharmacies including Lazz Pharma can also be found in nearby areas.

The area closest to Mirpur East is Mirpur South, which consists of the areas that are on the western side of Begum Rokeya Sarani opposite to Mirpur East, including Taltola, West Shewrapara, Pirerbag, Monipur, and Mirpur-1. The road leads to the Mirpur-10 roundabout, which has Mirpur West on one side, and Mirpur North on the other. Other nearby areas include Kafrul, home to many bases of the Armed Forces, and other areas such as Agargaon and Sher-e-Bangla Nagar, where many important government agencies and ministries are located.Also, thanks to Shaheed Sarani, areas like Mohakhali, Mirpur and Gulshan aren’t too far from Mirpur East.

Mirpur East has a huge number of residents with a need for socializing and entertainment. And what better way to do that than restaurants? You can meet up with friends or go out to eat with family and have great conversations with great food and drinks. And Mirpur East does not disappoint. There is a fantastic selection of restaurants and eateries in the area catering to all tastes and price points. There are countless local eateries serving local cuisine to the office goers and residents of Mirpur at affordable prices. For fast food cravings, there’s NOSH in East Shewrapara, famous for its burgers. There are several places offering indigenous cuisine in the East, including the famous Hebaang and CHT Express. For your evening kebab and grill cravings, there’s IQRA Restaurant and Grand Moharaj In case you’re looking for a bit more upscale restaurant, there’s Zaytun Restaurant opposite of IDB Bhaban that offers middle eastern cuisine. You’ll never be dissatisfied when looking for a place to eat, meet, and greet in Mirpur East!

Mirpur might not be the first place that pops to mind when you think about shopping, but the people in the area do have shopping needs that have to be met. There are a plethora of options when it comes to shopping in Mirpur East. Most top brands have outlets on Begum Rokeya Sarani. The area also hosts numerous furniture shops that are selling readymade furniture. There are also multiple shopping complexes and markets housing different types of stores including electronic shops, clothing stores, hardware stores and many other types of stores, such as Ibrahimpur Bazar and Rajanigandha Market. There’s also BCS Computer City, which is the biggest computer and electronics market in Bangladesh, and it is not too far from Mirpur East. There are also countless supershops, with the most popular being Daily Super Shop, although it is on the western side of Begum Rokeya Sarani, is very popular with the residents of Mirpur East.