Uttara is, without a doubt, one of the neatest and most well-organized planned neighborhoods in the city. It is also one of the busiest places in the city, with the cacophony of the people and cars in the roads buzzing throughout the aptly named ‘Uttara Model Town’. Uttara is also your only gateway to the skies, with the largest airport in the country, Hazrat Shahjalal International Airport, located there. All in all, you could say that Uttara is a modern, self-sufficient area. Today, we will be talking about Uttara East, an area comprising of sectors 2,4,6 and 8. 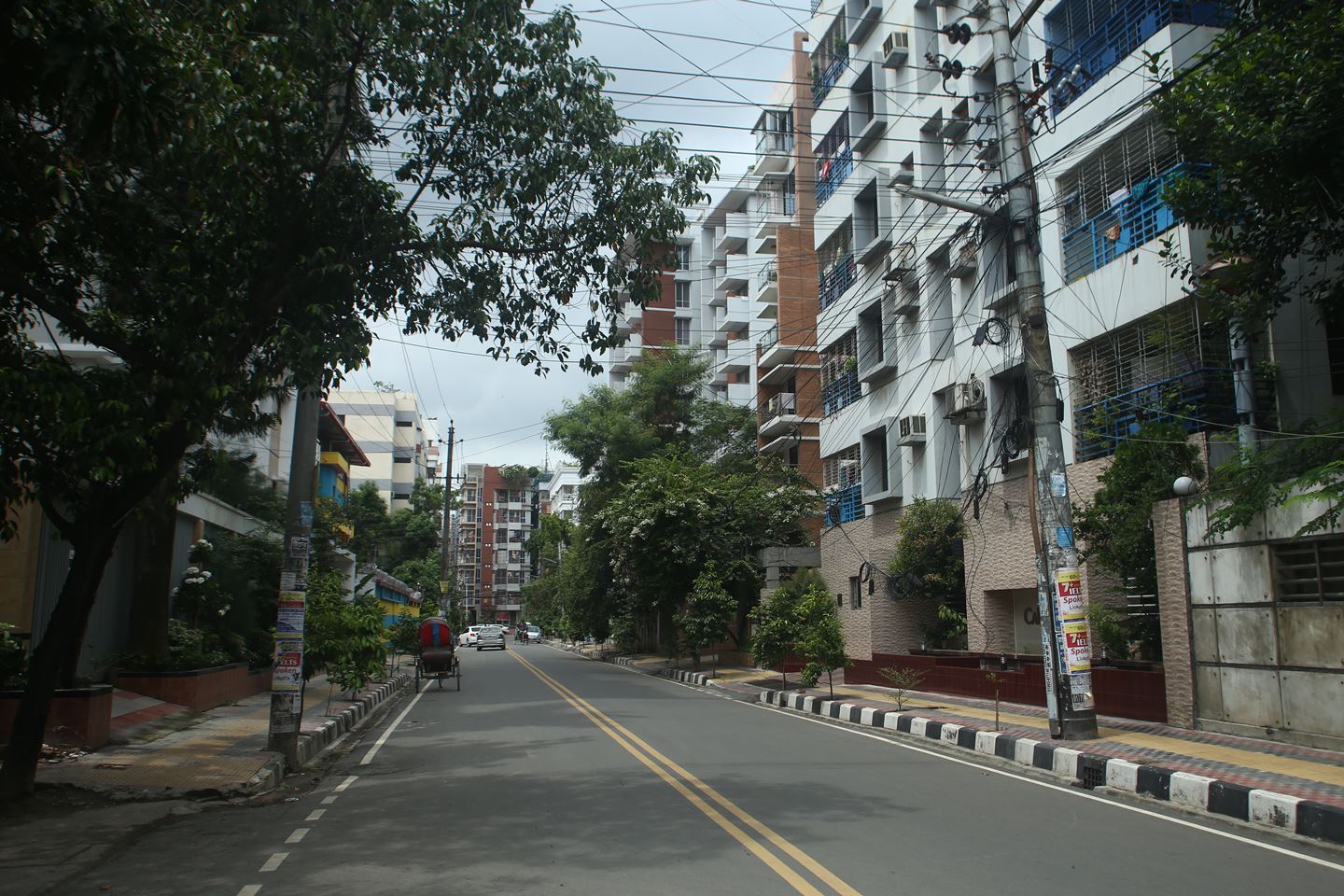 When it comes to looking for a home, Uttara is the location that is at the top of everyone’s list. Well maintained roads, easy access to necessary facilities, and its seclusion from the hustle and bustle of other parts of Dhaka are why the area is so favored by everyone. The neighborhoods of Uttara are quiet and peaceful. There are elite schools for children as well as offices, banks, and markets. There are also multiple brand shops. Uttara East is on the right side of the Dhaka-Mymensingh Highway, which is the main road that connects the rest of Dhaka to Uttara. It starts in Sector 2, where the Rapid Action Battalion Headquarter is located. The sector stops at Shayesta Khan Avenue. There aren’t many houses in the area. After that, there’s Sector 4 & 6, which goes up till House Building Bus Stop. Finally, there’s Sector 8, which is different when compared to other Sectors of Uttara. The area consists of mostly living quarters of the employees of different government agencies. 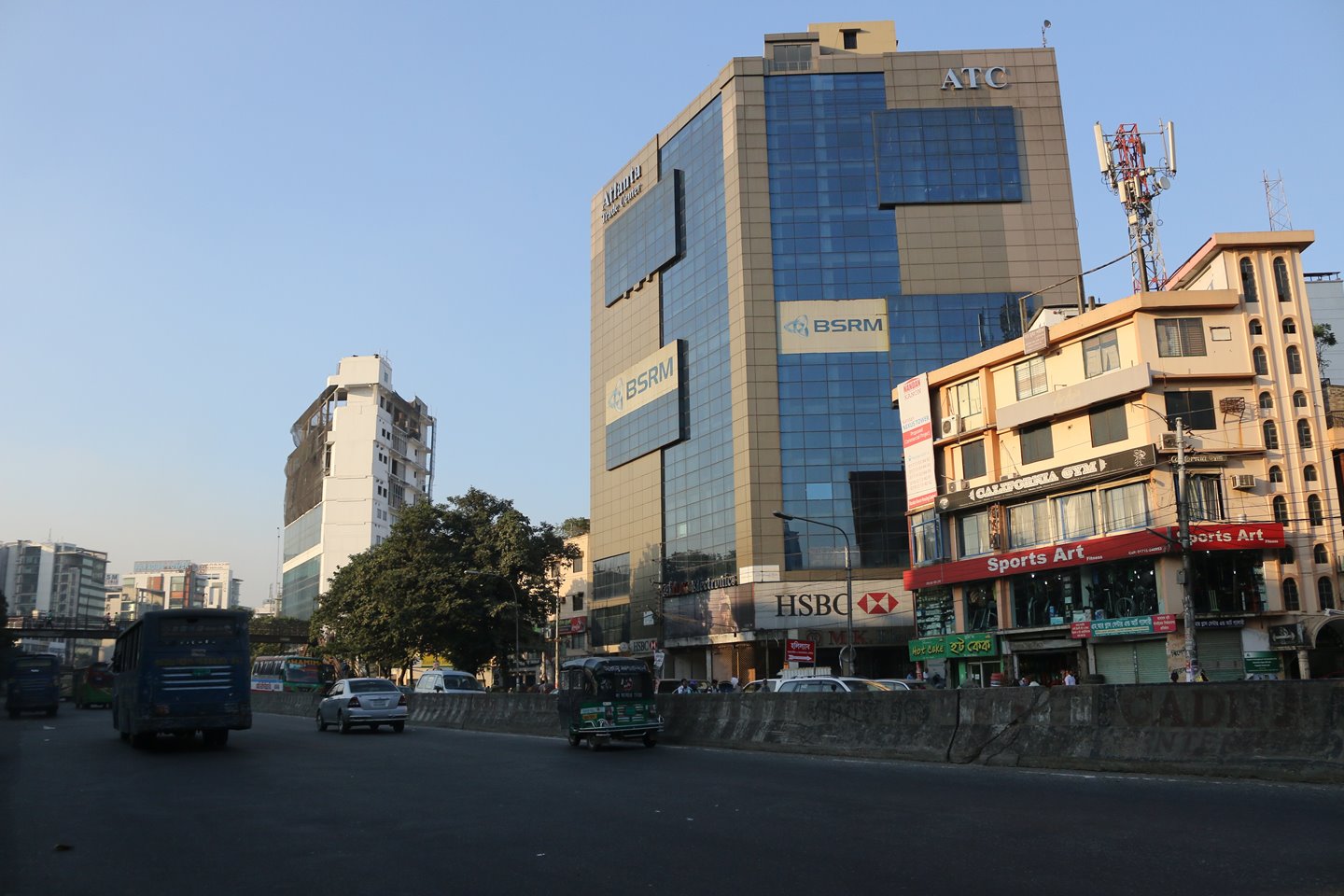 In the ’80s, Uttara was thought out and planned to be a neat and clean, well-organized residential neighborhood. An area that is far away from the hustle and bustle, tucked away in a quiet corner of Dhaka. There is still that well-organized feel to the area, as it is a planned neighborhood. But it is a far cry from the quiet corner of Dhaka that it was supposed to be. Rather, it is one of the busiest neighborhoods in the city. Banks and financial institutions, offices, showrooms, educational institutions, hospitals - you name it, Uttara has it. 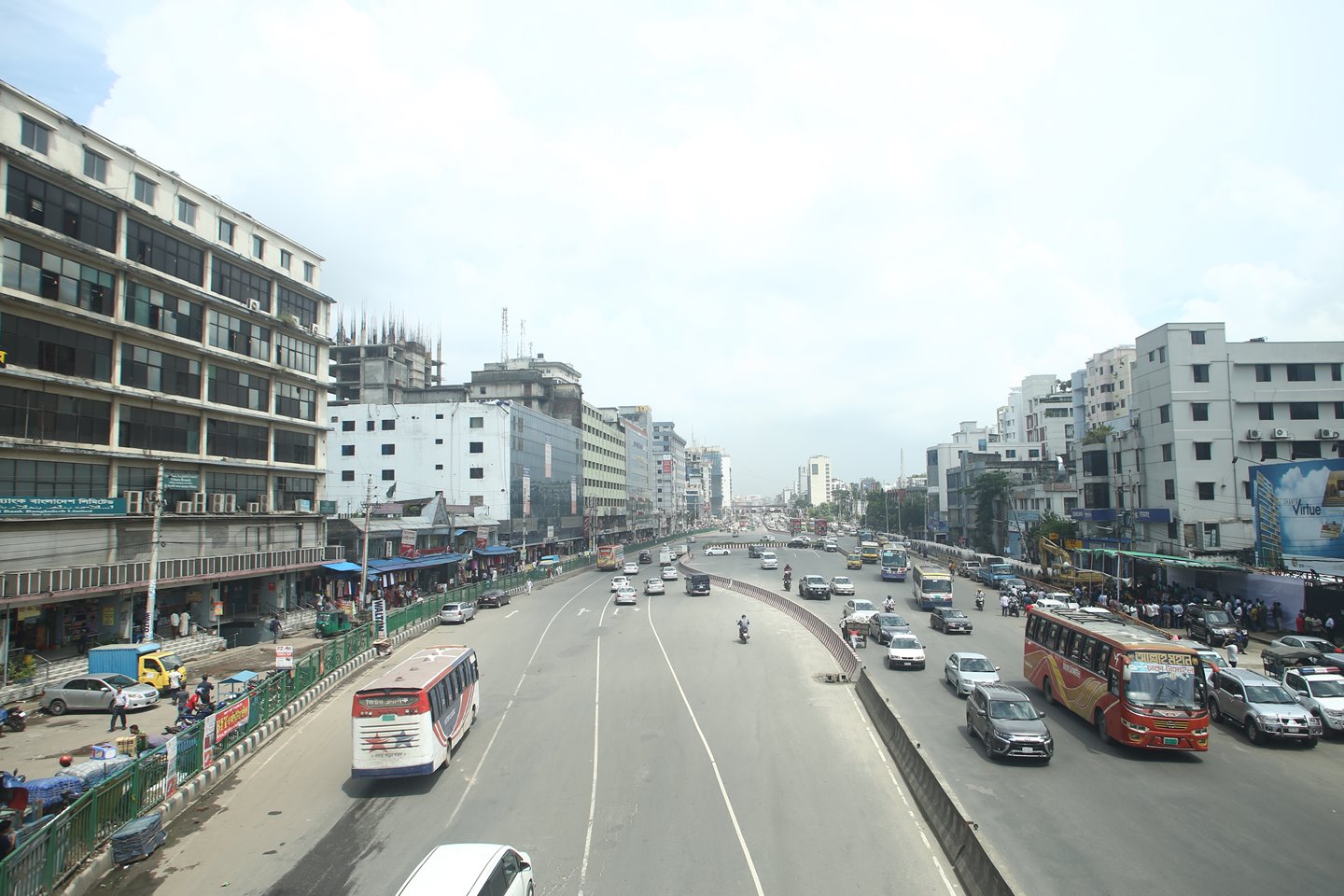 Transportation systems are a vital component of life in the city. And any developed area should have proper transportation infrastructure. Buses starting from Uttara go to all parts of Dhaka. Most of these buses either start from Abdullahpur or Tongi Bazar. Some also start from Diabari or Khalpar. There are even some buses that come from far-flung places such as Ashulia and Gazipur. Some of the buses are run by government-owned BRTC, and some are privately owned AC and Non-AC bus services. Rickshaws are also available for travel inside the neighborhood. You won’t see them on or near the highway though. This is why the journey between the eastern and western sides of Uttara cannot be traversed by rickshaw. Numerous vehicles flood the highway, but there isn’t much traffic as there used to be, as a result of strategically placed U-loops in between the Airport and Jashimuddin Road, and another one at Azampur.

Anyone would love to live in an area that is as well-organized as Uttara is. One of the factors that make the area attractive to potential residents is its many elite schools. Be it Bengali or English Medium education, there are great options. Some of the best English Medium schools in the city, including The Aga Khan School, DPS-STS School, and International Turkish Hope School, all of which are located in Sectors 4 & 6 in Uttara East. One of the best Bangla Medium schools in the whole country, RAJUK Uttara Model School & College, is located in Sector 6 as well. There’s also Nawab Habibullah Model School & College, Uttara Girls High School, and many other Bangla Medium schools. Overall, you will some of the best schools in the country situated in this area.

Uttara East is home to many top-class healthcare facilities. The famous Kuwait Bangladesh Friendship Hospital is located on Alaol Avenue in Sector 6. There’s also Popular Diagnostic Centre in Sector 4, with many top doctors having their chambers there. BIRDEM also has a branch in Sector 4, on Road 13. All in all, Uttara has numerous diagnostic centers and medical facilities.

The area is ideal for residential living. You can spend hours roaming around with friends and family in Uttara. All while being surrounded by greenery, as each sector has its own park and playground. The most famous of these is the Sector 4 playground, which has a pond inside and is located adjacent to the Aga Khan School Ground. There is also a beautiful park located in Sector 6.

Each area needs to have a place of worship for residents. And Uttara does a fantastic job of providing such a place, with every sector in Uttara having its own mosque. Uttara Central Mosque is located adjacent to the Sector 4 playground. Sector 6 has the Baitun Nur Jame Masjid. There’s also the Jamtola Eidgah on Road 2/B in Sector 4.

Uttara East has the Dhaka-Mymensingh Highway on one side and Railway Tracks on the other side. This railway track is what separates Uttara Model Town from Uttar Khan and Dakshin Khan. To the north of Uttara East is the Turag River, Abdullahpur, and Tongi.

Uttara East has endless options when it comes to food. The area has numerous restaurants and food carts. For example, there’s California Fried Chicken (CFC) in Sector 4. There’s also Shumi’s Hot Cake, as well as Sea Shell Party Centre opposite to Rajlokkhi Centre. The streets of Azampur are also littered with many food carts.

The area has some fantastic shopping destinations, starting from small stores to large shopping malls, and everything in between. For fresh groceries, the wet market opposite to RAJUK College in Sector 6 is very popular. It is sometimes referred to as BGB Market. Nearby the wet market is the first and only brand outlet of French Sporting Goods retailer Decathlon in our country. The stretch of the road opposite to Jashimuddin Road Bus Stop plays host to numerous brand outlets of shoe manufacturers such as Bata, Apex, and Jenny’s. And to top it all off, there’s Polwel Coronation Market, which you will find right before entering into Abdullahpur. 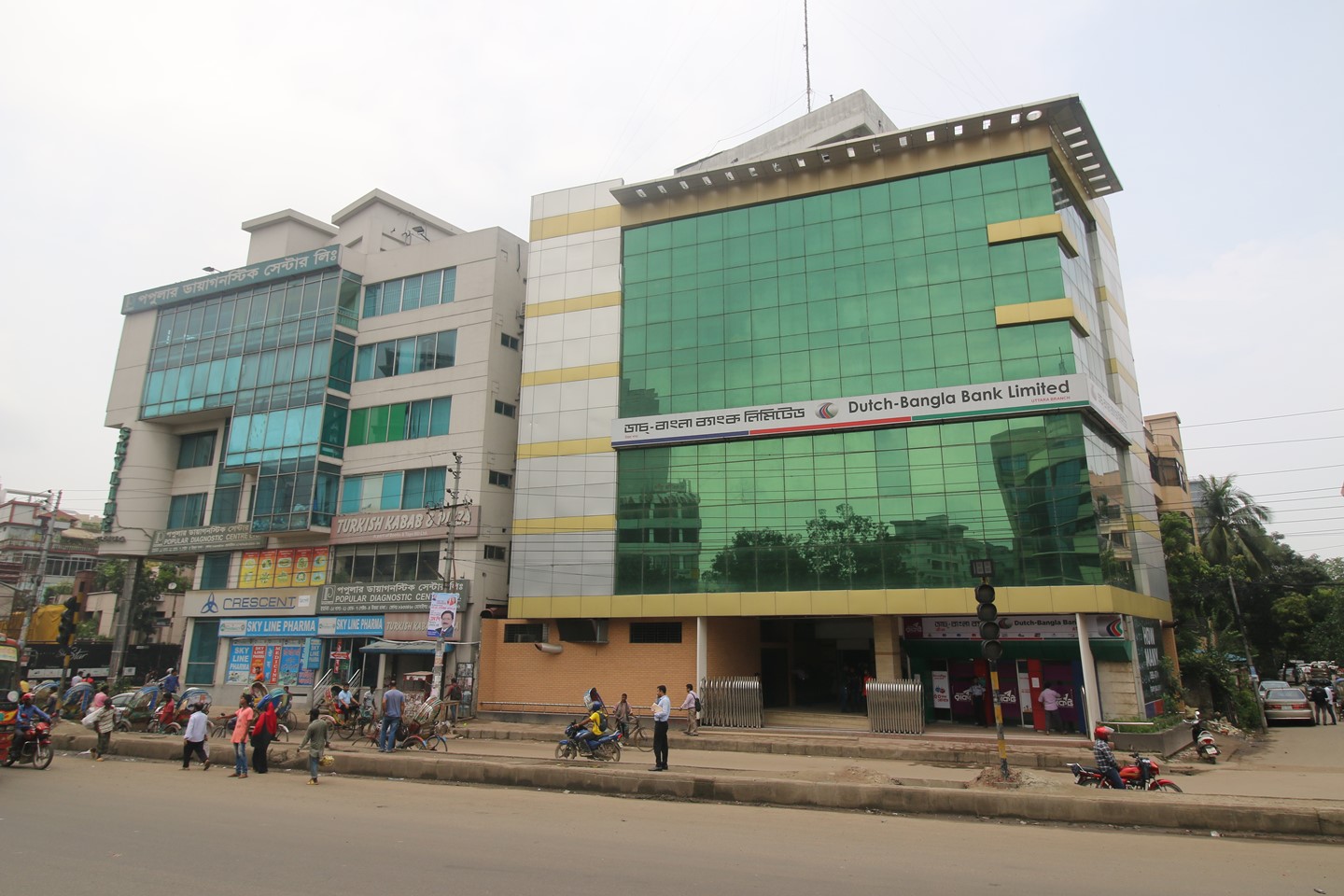 This part of town has a lot of banks serving the financial needs of the residents. Most of them are situated in buildings adjacent to the Dhaka-Mymensingh Highway. One of HSBC’s seven branches in Bangladesh is located in Sector 4. As you go towards the north, you’ll come across Dutch Bangla Bank, Premier Bank, Mutual Trust Bank, EXIM Bank, Trust Bank, One Bank, AB Bank, and finally Standard Chartered Bank near Azampur. These banks make the lives of the residents of Uttara East a whole lot easier.