Everyone chooses to express themselves in different ways. Some express through singing or dancing; others choose poetry, drama or even literature. However, using architecture as a form of art to express oneself  is really an underrated choice. It’s not easy to create a house with a spectacular design, yet, this form of art gets less appreciation than it deserves. Our home is our place for relaxation. All the architects want their designs to fit into any urban area of the world. However, there’s no shortage of people with strange ideas. That’s why a lot of architects stand out with their unique, eye-catching designs that easily stands out from other buildings. Today, we will talk about some of those designs that made some of the unusual homes in the world.

American people are probably a little too luxury-loving and the airplane home is just a small example of that. Bruce Campbell, who has a fascination with airplanes, decided to create this unique structure in the year 1999. This house is actually a retired Boeing 727 fuselage. Back then, Bruce spent around $ 100,000 for the plane. Later, he spent an additional $ 20, 000 for the interior renovation. According to Bruce, the house is fire-resistant and extremely safe. His obsession with airplanes led him to build one of the strangest homes in the world.

Upon visiting Trassenheide, you will come across a strange looking house. Two Polish architects designed this house and at first glance, everything seems fine except for one thing – this house is completely upside down! However, this purpose of this house is to be a tourist attraction and no one actually lives there. This is basically a part of the ‘The World Upside Down’ project which challenges people to experience the world from a fresh perspective.

Did you see the Star Wars inspired artwork on a WASA water tank in Gulshan 2? The architects from Bham Design Studio had something else on their mind. They turned the abandoned water tower, located in the Belgian village of Steenokkerzeel, into a house! However, the old water tower wasn’t used as a water reservoir; during World War II, German Nazis used this tower as one of their hideout places. What was originally a 100 ft. tall water tower is now a house, making it one of the most unusual homes in the world!

Nowadays, most people are concerned about their safety and personal space. Every software, website and offices have their own privacy policies – but if you want to live in this glass house built by the Sou Fujimoto Architects, forget all about your privacy because this house is one of the strangest homes in the world as it is completely made of transparent glass! The builders of the house said that they took inspirations from their ancestors since life back then was very transparent and simple.

Whether the Polish architect Jakub Szczesny was a fan of Mahabharat or not can’t be told for sure but he knew how to design a house that was about proper space utilization. 152 centimetres is the maximum width of the house which makes it one of the most unusual homes in the world! Whoever designed this house decided not to waste even an inch of the city – and he did exactly that! He built his home in the middle of two buildings.

South Korean people changed the definition of the term ‘strange house’. They built an entire museum – that too, about toilets! The Mayor of the city created this museum in order to collect funds for the World Toilet Organization. However, it took more than a million dollars to build the museum itself. The unique structure has an extraordinary balcony which consists of flags of various countries.

You can find a lot of unusual homes in the world if you just look it up on the internet. However, these six were among the best. If you had the option to live inside one of the strangest homes in the world, which one would you pick? Let us know in the comment section below! 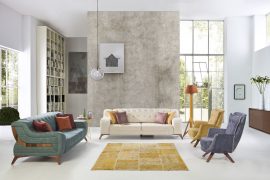 How the Bproperty interior team helps its clients with interior solution 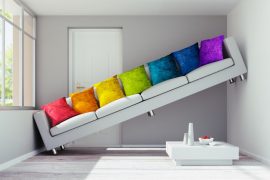 5 things to consider before designing a narrow living space 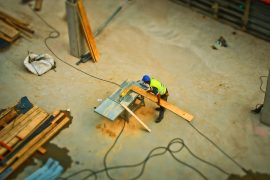 Why you should design your interior during building construction