This abode in the south of France is the home of Brad Pitt and Angelina Jolie. The 17th-century palace has a vineyard and just the 35 rooms, which given how they like to adopt, this might just cover it. In classic castle style, there is a moat with extensive manicured gardens, a fountain, and a church. There is also an olive grove close by to rare Aleppo pine trees.

The $10.5 million home of Gwyneth Paltrow and Chris Martin of Coldplay is located in L.A, Brentwood. They purchased the country style villa in late 2012. The concept house was built by Walter Smith and has six bedrooms and eight bathrooms, of course, there is a guest cottage on the land.

When people think of celebrity dream homes, High Hefner’s palace of hedonism springs to mind. Equipped with a wine cellar, 22 rooms, a zoo, tennis courts, and swimming pool, guests never run out of entertainment pursuits. When the lights go out, a different sort of entertainment commences.

Oprah has had an incredible career on the tv, and as a testament to that is her 42-acre house in California. She owns multiple others in  Lavalette, New Jersey, Chicago, Fisher Island, Florida, Colorado, and Maui to name just a few. Let’s say she will never be homeless.

The mega-mansion of X Factor’s grumpy talent judge is reported to be worth $25 million. He paid $8 million for it back in 2004, a shrewd investment for the man who can turn a fawning teenage artist into a superstar with his special approach. The 11,550 square feet mansion has a luxury spa and gym, and of course a high-tech media theatre. 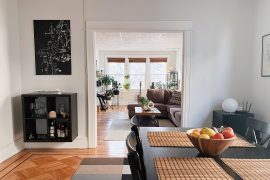