In the city of mosques, Dhaka, there are many hundred-year-old mosques with history and heritage. These mosques are located in different parts of Dhaka and are known for their unique design and skillful architecture. Among which there are several mosques in old Dhaka. Over time, some have needed to be renovated, while others have lost their centuries-old beauty due to carelessness. However, some new mosques have been added to it. But let’s find out about some of the mosques in Dhaka in today’s blog.

One of the oldest mosques in the Dhaka district is the Ghat Jame Mosque in the Babu Bazar area. This mosque is also known locally as Amir Uddin Daroga Mosque. The mosque was built in 1840 by a wealthy Daroga named Amir Uddin. He built the mosque at that time with a part of his earned money, along with a house. Although the house is no longer visible, the 150-year-old mosque is still standing. When you enter the mosque, you will see white stone walls. People living in the vicinity of Buriganga come to perform prayers in this mosque built in the Mughal period. Later a madrasa was built right next to this mosque. You can go to the banks of the Buriganga at any time to see this one of the best mosques in Dhaka which holds the history of a hundred years.

Baitul Mukarram Mosque, also known as the National Mosque of Bangladesh, is located in the Paltan area of ​​the capital Dhaka. In this mosque, 40,000 devotees can perform prayers at the same time. Built-in the style of Mughal architecture, the mosque has a long history. The structure of this mosque, which was completed in 1968 in the city of Dhaka, is very strong. The eight-story mosque has a huge space inside. Built-in the style of the Kaaba in the holy city of Makkah, this mosque is therefore quite different from other mosques in Dhaka in design.

On the ground floor of Baitul Mukarram Mosque, there is a huge market complex with a lot of space. The Islamic Foundation Bangladesh is responsible for the maintenance of this national mosque. There is a beautiful arrangement to perform prayers on each floor from the second floor to the sixth floor. Thousands of devotees gather in this mosque to perform Eid prayers every Eid.

South Town Jame Mosque has been built very close to Dhaka in Keraniganj South Town residential area. It took about 2 years to build this white and white mosque surrounded by greenery. About 600 people can perform prayers in this mosque at the same time. The mosque has a total of 3 main wooden gates. And there is no house, no noise around it.

There is no air-conditioning system inside this mosque. The light and air of nature coming through the rows of windows have made the inside of the mosque a unique place of peace. Seen from a distance, this strangely beautiful infrastructure looks like a palace. And the domes of this palace seem to be touching this huge sky. This mosque, built-in Dhaka, the city of mosques, with an extraordinary architectural design, has caught the attention of many. So at the end of the prayer, many people enjoy the peace by walking around the mosque in this beautiful environment.

Located at Chawkbazar in the Old Dhaka area, this very old mosque is called Chawkbazar Shahi Mosque. The mosque was built in 1676 by Mughal subedar Shaista Khan. The structure of the mosque was such that it had three domes at the beginning.

However, after several renovations, the situation is no longer the same. The interior design of the mosque was square in the middle, rectangular on both sides. And the upper side was covered with domes.

It is one of the oldest buildings erected on a high platform in the city of Dhaka. Additionally, below the platforms are several square and rectangular rooms with vaults. It is believed that the rooms below the platform of this mosque housed the students and teachers of the madrasa, hence these buildings are also called residential madrasa mosques.

Like the Shahi Mosque in Chawkbazar, the Khan Mohammad Mridha Mosque is located in the Atoshkhana of the Old Dhaka area. Located right next to Lalbagh Fort, this ancient mosque was built around 1705. The Khan Mohammad Mridha Mosque was built on the orders of Dhaka Chief Qazi Ibadullah. Adjacent to the mosque is a beautiful garden surrounded by greenery. There is a place for prayers on the upper floor of this two-storied mosque.  Moreover, The mosque is currently being maintained by the Archaeological Department of the Government of Bangladesh.

If you visit Abul Khairat Road in Armanitola, Old Dhaka, the city of mosques, you will see a beautiful mosque. Numerous blue stars are painted on the white marble of the mosque. And that is why this mosque is known as Tara Mosque. The mosque was built in the 18th century by an influential man named Mirza Ghulam Pir. Later in 1926, Ali Jan Bepari, a local businessman from Dhaka, renovated the mosque. At that time, colorful Japanese candy was used in the mosaic work of this mosque. The five-domed mosque is 70 feet long and 26 feet wide. This is one of the very popular mosques in Dhaka.

The ancient mosque was built in 1679 in Ramna, a well-known area of ​​the capital Dhaka. Additionally, in the crowd of modern buildings and architectural style of Dhaka, the city of mosques, these ancient architectures seem to stand as individual stories. Built during the Mughal period, the mosque is 68 feet long and 26 feet wide and has three domes. There are black stone carvings on the square. This mosque, which is more than three hundred years old, was built by Khwaja Shahbaz, a wealthy merchant and Sufi prince of Dhaka. The carvings and designs inside the mosque are no longer the same as before, the walls have lost their color, and even cracks have appeared in many parts. However, every building in this hundred-year-old mosque is reminiscent of a bygone era.

So if you want you can also visit the new and hundred-year-old traditional mosques in Dhaka. Henceforth, it will be a great experience and a spiritual trip for you. 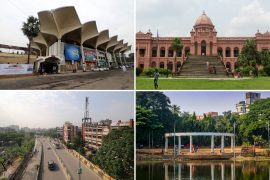