“The days that we had together,

Are they completely finished?

Is there nothing left in them?”

Rabindranath Tagore wrote this line from a completely different perspective, but much to our surprise, the figurative meaning of this line holds very true to the situation everyone has been experiencing for the past few months. All of mankind is witnessing a neo-normal life following the onset of the coronavirus pandemic, an unprecedented turn which took a huge toll in everyone’s lives.

During the beginning of this year, the outbreak of coronavirus created havoc and the whole world began to face its consequences. Unfortunately, some lost the battle against the virus and succumbed to death, whereas others keep facing the battle head on. Living alongside corona has not been an easy ride and to give you a clear picture regarding how the whole world has been adapting to it we have put together this article.

The phase of self-quarantine

The first corona patient in Bangladesh was found on 8th March 2020 and in order to prevent the spread of infection, the government imposed a lockdown from 26th March 2020. Everyone braced the self-quarantine life and started to adjust with the new norms. Instead of office lunch with dear colleagues, it was time to enjoy regular meals with family members. Gradually, online meetings and home office became an integral part of daily life. All in all, the way people adhered to the safety standards and prevention measures is surely commendable.

There are always two sides to a coin. Living alongside corona has brought some positivity too. Interestingly, the e-commerce sector thrived during this time as people were leaning more towards online shopping. Besides, this whole lockdown period has definitely been a once in a lifetime opportunity for everyone to discover their own selves or has been an exclusive chance to spend precious moments with their loved ones.

On the other hand, the economic crisis that befell different countries in various ways was inevitable. Economist Stephen Carlton, who is currently a professor of Stony Brook University, stated that “The impact of lockdown came as a major shock to the economy, which has affected even the smallest parts of the economy. Small businesses were on the verge of bankruptcy, whereas numerous people have lost their jobs.” No businesses were spared from the impacts of corona, be it the tourism sector, restaurants, or even the retail stores. Sadly, due to a lack of available work, people were forced towards reverse migration, which brought a drastic impact on their lives and livelihoods.

Back to the neo-normal workplace

The concept of coming back to something is often romanticized by modern lyricists. However, coming back to offices while living alongside corona was not really a matter of joy to people. Even though the sheer thought of meeting colleagues after such a long time might have felt exciting, knowing the fact that one has to wear masks, maintain social distance and use sanitizer flipped the entire scene.

Initially, home office facilities were available for employees, but gradually offices went back to their prior work routines while ensuring hygiene measures in the office premises. Sanitizers were placed right at the entrance of the office and employees were allowed inside after their temperatures were checked. Moreover, anyone infected with the virus had been, and is still, entitled to 14 days of leave for self-quarantine. Individuals remained cautious and maintained all hygiene rules and regulations. Gradually, everyone seems to have embraced the whole neo normal life while living alongside corona. The severity of restrictions with which everything was followed during March to June, wore off once things started to reopen.

The burning desire to travel

We can easily relate to the travelogue of Sunil Gangopadhyay, ‘Payer Tolay Shorshey’, since corona has also hampered the wishlists of wanderlust. It really has been a tough phase for travel enthusiasts living alongside corona and maintaining a neo-normal life. Given that they have been limited to certain boundaries for most of the year, the desire to roam the world has reached a level unlike before.

Once some restrictions were lifted a bit, many rushed to get the view of the mighty sea, while some were finding serenity in the midst of the mountains. Even though the hygiene rules were not followed properly outside of Dhaka, tourist spots continued to remain crowded for some time. Restrictions on foreign tourist visas further stirred up the scene in the local tourist spots. But this eventually led to an increase in the number of people being infected from corona. People residing in the city remained vigilant regarding the pandemic, whereas the scenario was entirely different in other districts. Especially in the villages and village towns, people showed signs of doubtfulness regarding the matter.

While measuring the impacts of corona, the tourism industry will surely make its presence in the top list. Still a ray of hope can be found, since people are considering to travel in spite of the current circumstances, while undertaking preventive measures like using masks, maintaining social distancing and 14 days of self-quarantine. However, there are still changes going on in the neo-normal life. Even though travel addicts are stepping out, they are simultaneously planning for safe destinations near homes.

According to the booking site Travelocity, the majority of the travel bookings which they received lied within a hundred miles of the traveler’s home. The highly rated travel insurance comparison site, Squaremouth, shared statistics which depicted that, out of all the travel insurance policies bought between 1st April to 10th May, 48% of them were for internal trips – which is 15% higher than the previous year. The data highlighted everyone’s interest in traveling to places which were in close proximity to their homes. While living alongside corona, activities like trekking, road trips and backpacking were in high demand. The neo-normal life has got everyone into the habit of carrying soap, sanitizers, masks and gloves inside their bags while stepping outside.

The neo-normal life has glued everyone to digital screens. There has not been any other way left. Since worldwide schools also closed down as a measure to combat the spread of coronavirus, students have had to rely on online classes instead. While living alongside corona, sitting in front of laptops wearing school uniforms has become a common practice among students. Veteran teachers have been successfully teaching difficult topics ranging from calculus to organic chemistry through conducting Facebook live classes. A good thing is, neo-normal life established something which modern countries have been trying to implement for quite a long time – technological advancement in education. No one could have ever thought that this would finally take place under such circumstances.

However, there are a few shortcomings in the changes of the global educational system as well. The renowned weekly scientific journal ‘Nature’ featured a report expressing that low and middle income countries which fall in the Southern Hemisphere of the planet faced critical situations due to online classes. Internet connectivity and several other reasons acted as a hindrance in this case. According to the International Telecommunication Union, 36 crore students around the world are deprived of internet connections. To avoid such a scenario and with the sole aim of making things convenient for everyone, governments of several developing countries like Bangladesh have ensured to provide classes through radio and television channels in addition to broadband connections.

Apart from education, training and seminar sessions were also conducted through video calls. During the second quarter of this year, video conferencing app Zoom witnessed a massive increase in the number of subscribers, around 458%. Besides, a lot of public and private sector services were made available online based on the situation. Other than that, online banking and e-passport applications have made lives even more convenient for everyone while they have been dealing with the neo-normal life.

The e-commerce sector performed well while people have been living alongside corona. In the beginning, medicine was in high demand on online platforms. But gradually, online platforms became a reliable source of shopping for any kind of festive and luxurious events. This might have been a common practice in other developed countries, but in Bangladesh this mode of shopping became widely popular during the neo-normal phase.

The real estate sector in Bangladesh also witnessed a wave of change while people were living alongside corona. For instance, let’s consider Bproperty, the only property solutions provider in Bangladesh, that introduced an online property fair  with exclusive projects. In addition to that, Bproperty made an arrangement of virtual tours in order to make the entire process of viewing property even safer.

This neo-normal life has put limitations in organizing all forms of events, considering there are numerous restrictions which need to be followed. Still, this has not stopped anyone from celebrating certain festivals. Spirits remain the same, just the way things are celebrated has changed greatly.

Living alongside corona and adjusting to the neo normal life has not stopped anyone from getting married; it has rather brought back the traditional ways of how marriages were arranged. People mostly tried to avoid community centers and managed to accommodate guests in designated venues while observing social distancing and other safety measures. The dining tables were arranged for six people instead of eight and hand sanitizers were nicely placed in the trays along with the sweets while welcoming the guests.

Life does not stop for anyone. There will be happiness and sorrow, diseases and many other problems which will eventually teach us how to coexist in this world. We are not supposed to give up, and similarly the battle against corona is something which is teaching us to keep on fighting consistently.

While reminiscing the past, what makes us feel sad is the fact that in this neo-normal life there will not be any TSC concerts, no gatherings in Baishakhi Melas or even a white blackboard inside a classroom. We are so engrossed with washing hands, that sometimes it feels the line of destiny will fade away one day from our hands. Still, the journey of living alongside corona can be accompanied by a little positivity and make people look forward to new hopes.

Who knows, maybe this phase is just a transition for us which will connect our past and the future. The intellectuals of this generation are continuously striving to come up with a possible solution to this problem, a vaccine! Since we are all on this journey together, let’s all set our mind to look forward to something better, something new, and something greater than this neo-normal life. 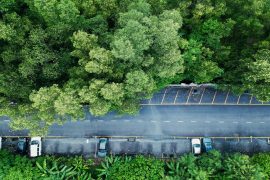