Whenever we hear the word ‘University’, we think of Dhaka University. The great old structures of Dhaka University have been standing with their heads held high for many years. The same image certainly comes to your mind as well, right? A varsity is supposed to be a four or five storey building but those days are gone. Today we’ll be talking about 5 unique university designs that will leave you mesmerized. There are universities throughout the world that have broken the mold of traditional design and have left a mark. We have seen many innovative shopping centers, residential and commercial designs, but if you want to read see some unorthodox universities, you need to read this article! So let’s take a look at 5 unique university designs.

We begin with the National Autonomous University of Mexico. It was designed and constructed by some of the most talented individuals in the country. For example, Diego Riviera and David Alfaro Siqueiros, two of the most recognized artists of Mexico, had a hand in creating the astounding murals that can be found on the main campus. This unique building is considered one of the most beautiful buildings in Latin America. The exteriors are painted with native Mayan symbols, depictions, and art. You could spend hours looking at all the details and feel as if the Mexican culture itself had come to life in front of your eyes. One of the biggest attractions of the building is probably the library. The university grabbed the world’s attention when it was designated as a UNESCO World Heritage site in 2007. Who wouldn’t want to study in such a unique and wonderful university?

The Ray and Maria Stata Center at MIT, Cambridge, Massachusetts

From afar, this uneven and bent looking building looks like a museum or entertainment center. No matter what it might look like to you, it certainly won’t look like a university to you. How could a building with such an odd shape be a university? This imagination-come-to-life university was designed by the award-winning Frank Gehry. Each building looks as if it’s leaning on to the next building at an awkward angle. As a result, this random and odd shape has made it one of the most unique structures in the world. Thousands of students and faculty are working, studying and researching here. The design of the university is certainly a great expression of the artist’s creativity.

The Victorian College of the Arts in Melbourne was built in 1972. Along with dance, music, film, and television, the college has many other curricula ready for students from all over the world. Aside from the curriculum, the contemporary exterior and design of the theater building are one of the more significant attractions. The Victorian College of the Arts is an impeccable product of modern creativity. Finding a university that breaks away from traditional design is truly rare in this world.

Edinburgh Napier University is one of the oldest establishments in Scotland. It is named after the 16th-century mathematician and philosopher John Napier. But the lecture theater was built in 1964 with a design that was way ahead of its time. It is an egg-shaped building with the exterior made entirely out of glass that will easily catch your eye! We can find many buildings like this today, but designing such a building was a bold move in 1964. The theater building of the historic Edinburgh Napier University has been able to set an example of great modern design.

So these were the top 5 unique university designs of the world. Which university did you like the most? Don’t forget to let us know in the comments section below! And to read other unique articles, stay with Bproperty blog. 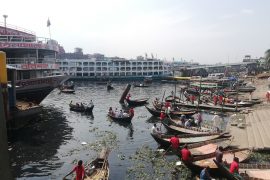 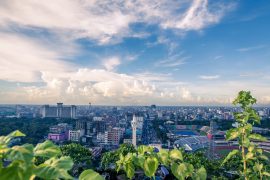 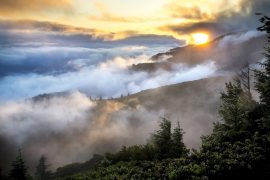 Most beautiful natural gateways in the world